Amber tagged me!!! Its my first time evah and I feel special!

Here are the rules:

1. Link to the person who tagged you.

3. Tag 7 random people at the end, and include links to their blog.

1-I’m a Catholic-Hindu. Well not exactly but I was brought up in both religions so I have a bit of both. My mom is a Hindu and my dad is a Catholic. I was baptized so I guess I consider myself more Catholic but I don’t follow either one strictly. I believe in God 100% but I don’t think that one religion knows better than the others. Growing up with both religions made me appreciate that having faith is what’s important. Jeff and I had two wedding ceremonies. On April 30Th, 2004 we got married under Hindu rites and on May 1st, 2004 we got married legally and had our Catholic ceremony. Thankfully Jeff is Catholic otherwise we might have married each other 3 times... not a bad thing except it would have been expensive!


2-My personality contradicts itself. I’m shy but outgoing at the same time. I’ve been told that I am too quiet and also that I’m bubbly. I’m very optimistic and very pessimistic too. It depends on my mood I guess. Sometimes I think everything is just peachy and other times I think I’m doomed. What gives?


3-I hate, hate, hate the phrase: "have your cake and eat it too." Why would you have cake and not eat it? Seriously? I get that it’s supposed to contradict itself but I can’t stand it. Maybe because English is my second language and I look for literal meanings? I don’t know, either way I find it annoying and will never get over it.


4-Since my mom is Guyanese I know to dance Caribbean and West-Indian music better than Spanish music…. and I grew up in a Spanish country! Sad but true. Give me Reggae, Soca, calypso, Indian, some hip-pop, slow songs and I’m good to go but Salsa, Merengue and Bachata? Not so much. I know the basic steps and that’s about it. I keep telling myself that I’ll learn someday. We'll see.


5-I wanted to be famous. When I was younger I swore that I would become a singer. If you ever hear me sing you’ll know why that didn’t work out. Personally I think my singing is great and that people just have bad hearing, but whatever. Since I knew that wouldn’t happen I figured I could be an actress. I did some plays in college and liked it but decided that I hate attention so I stopped. According to my professors I had talent and I guess that’s all I wanted to hear.


6-I love books. I love reading and emerging myself in a fantasy world. In my head, I’m always the heroine/main female character in my books. Right now if you call me "Bella" I might just respond. When I was learning English I wished that I would be good enough one day to write my own book. I would love to but I would hate to fail. I also don’t have enough dedication lol.


7-I can draw! Well at one point I could, I’m sure I suck now since I haven’t practiced in years. Let me clear up the fact that I’m only good at simple things. I loved portraits but I was never good enough at it. I would have improved if I continued practicing but that didn’t happen. Ah well. Here is a picture of my last drawing: 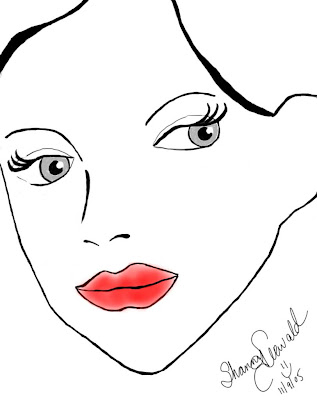 And that's all I have to share, now its your turn!