Today is Pregnancy and Infant Loss Remembrance Day in the US. At seven pm local time, across every time zone, all are invited to join in lighting a candle in remembrance and honour of little ones loved and missed.

I will be lighting 3 candles. One would obviously be for my loss, another one will be for my cousin who passed when he was 6 years old. That was exactly 4 years and 6 months ago and I know he is in heaven taking care of his family who misses him very much. And the third candle will be in memory of all of those little angels who are now with God.

On a much happier note:

Today is my nephew's birthday. He is turning 16 and I love him more than he will ever know. In my eyes his presence proves to me that miracles can happen. You see, my sister had complications with her pregnancy and unless they did a C-section both her and the baby's lives were at stake. So that's what they did except that Jenny was only 6 months pregnant.
They had Antonio, my nephew, in an incubator for what seemed like forever, I'm not too sure but I think about a month or more. He was a tiny, very tiny little thing with needles and tubes all over his body. He was improving but not enough. When he was finally able to breathe on his own they gave him to my sister to take home. I freaked out the first time I held him. His head was literally smaller than an apple. I don't know his exact weight or length but at the time he was half the size of a newborn. Very scary. Even scarier, the Dr. told my sister not to get too attached because the way Antonio's health was going he wouldn't live more than a week. It was the saddest thing to see my sister deal with that. And who couldn't fall in love with the baby? He was absolutely adorable and the cutest baby ever.

Jenny took care of him like no other mother could. I remember she would keep his body surrounded with cotton balls under the blankets to make sure he was warm. She kept his hands and fingers covered, I think with baby socks, because his finger nails hadn't formed yet. I'm not sure she even dared kiss his bare skin to avoid any infection. Can you imagine how difficult that's for a mother? He was extremely vulnerable and he was so lucky to have her as his Mom, still is lucky.

The Drs. were surprised to see him after that week passed but still cautioned her that any of his organs could fail at any time. Week after week they were surprised. When they were finally confident that his health was good, they simply said that he was a miracle.

That's what he is to me: a miracle. If someone is responsible for me having faith, and knowing that anything is possible, its him, my awesome 16 year old nephew who is getting stalked by girls already.

Happy Birthday Antonio!
I love you. 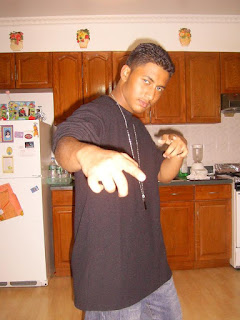