This year has been interesting to say the least. I had my ups and downs and my in betweens. But I am thankful for everything that has happened this year, the good and the bad. I've learned to appreciate my experiences because they taught me more about life and about myself.

January '08
I don't really remember. I think mostly I was looking forward to this year's vacation and spending most of the year pregnant. Neither happened. One for good reason, the other one not so good.

Had one last AF before getting knocked up and had nice Valentine Day with Jeff. He made a nice pasta dinner like he always does on Valentine for me. Can't wait for my dinner in 2 months honey! Hopefully the wine will be just for one.

Ah, the month I got my BFP. This month I felt pregnant, happy and full of dreams, but I couldn't stand the smell of chicken. Ewww.

May '08
We celebrated our 4Th year of marriage. Lucky Jeff!

I started this blog to use as an outlet for my frustrations and also for future memories. I probably would have gone crazy if I didn't have this blog. Even though pregnancy loss and fertility problems are very common (unfortunately), not many people in real life really understands. I would feel like I'm nagging all the time or that they feel sorry or annoyed by me.

June '08
Depression was getting a hold of me so I decided to dream about something else. I started to look at houses online. Jeff and I are dreamers. We liked to think that we would find a house we can afford, deep down we knew that we wouldn't be able to buy one until maybe 2009. I was so obsessed with houses! Not surprising for my personality.

We couldn't believe our eyes when we saw this little house, it had a lot of our requirements. We had to see it... and we did and we loved it. Not good for my already broken heart to fall in love with something we couldn't have. Or so we thought. The price was awesome because it was a bank owned property going for a short sale. I'm not saying any prices but it was almost $150k below its value. Score!


Here is a picture of our home with the snow effect! 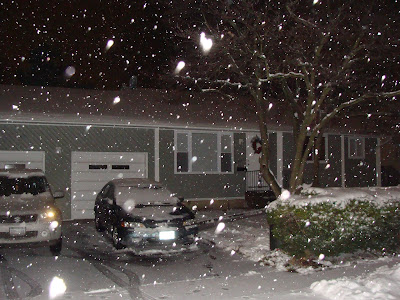 July '08
The packing began. I had no idea how many thing Jeff and I owned. I'll tell you this: I don't want to move ever again. If I do, I'm hiring packers.

August '08
We became homeowners!
We moved all our possessions to the house and moved in with my parents while we renovated. Jeff and I had serious Internet and TV withdrawal. We went from work to the house so we could paint and do fix-ups. We hardly had any time for ourselves. That was tough!

We also reached our 1 year mark of TTC. Very upsetting.
September '08
We moved in to our house.... and I found out I would share it with my mortal enemies: spiders. Those creatures seriously give me the creeps. One day they will kill me. I know it.
We spent our vacation working on the house instead of going away. It's our first year with no trip but also our first with a house. The trade was fair.

October '08
I fell in love with a vampire. *Sigh*
I also got bad news from my OB. After Jeff and I got ourselves tested, she said that there were too many things wrong and she referred us to an RE. I was feeling that depression coming on again. But I had Edward Cullen to occupy my worries so I survived.

November '08
I found out I had a benign brain tumor. Benign or not, it still freaks me out. Jeff and I did more testing and the results were less dramatic. Thank God.

I was upset and happy about the big movie release on November 21st. I was dying to watch the new Harry Potter movie but they cancelled it until next year. WTF? The good thing was that Twilight moved up one month and took the spot, nice!

I didn't have my baby for Christmas nor a pregnancy to take its place. But I do have a great RE and a very exciting plan. Once AF starts (I feel her coming) I'm going on Clomid, take the HCG shot and try ala old fashioned way. If next cycle fails though, I'm going straight for IUI.
We worked our butt's off on the house for 3 months and took Nov. & Dec. off. We were exhausted! Depending on the whole economic recession next year, we might work on finishing our huge basement. We'll see how that goes. We have other projects but we would love to have our game/party space. Not that I'm a host though, I tend to fall on the shy side. But still, we want what we want.