And Reality Sets In...

Did you know that as advance as science is, they still haven't come up with a painless magical way of getting babies out of a woman's body? Well, they haven't. I know because I've been checking and so far no luck. I'm actually disappointed, I've given science more than enough time but I guess it doesn't really care. Well, fine then!

I'm not going to lie, I am nervous about the whole thing. Ever since I saw a video of a woman giving birth in my high school health class I've been traumatized. And now that my turn is coming, I'll let you know that surprisingly giving birth isn't my biggest concern. Yes, I'm still nervous about it because well, I've never done it before and lets be honest.... the idea of a baby coming out from there looks quite painful.... and I don't know if its worse or better with two babies, we shall see. Besides, I don't even know if it will be natural or C-section all I know is that I don't know any better and I'll do what must be done when the time comes. I'm actually looking at it in a "matter of fact" way and that's how I plan to deal with it.

What does make me very nervous is the health of my babies.
I keep praying that they stick it out for as long as possible, I need their little lungs developed and I hope that they do NOT need to be in NICU for any amount of time. Of course this is all out of my hands, no one told short little me to get knocked up with twins and give them less chance of staying in there for longer time. Well actually maybe IVF did that, and I did sign up and pay for it, but that's not the point. Even if they require NICU time, I trust that they will be alright. I will be giving birth in a level 4 NICU hospital, which by the way is where Jennifer Lopez gave birth to her twins, so if its good enough for her then its good enough for me.

The thing is, time is flying and another reality sets in. I don't know if there is something wrong with my boy. You may or may not remember that the first NT scan gave a bit of an abnormal result (second one was fine but the Dr. doesn't go by that one), I was advised to either do a CVS or an amnio to get specific results but I chose not to do either. One, I didn't feel comfortable doing any invasive testing that could cause me to lose one or both babies. And two, no matter what the result I was NOT going to terminate either baby, which is the main reason they wanted me to do the procedure.

They said baby B (my boy), had a chance of having heart defects... well so far his little heart has been wonderful in each of our ultrasound scans, no abnormality and let me tell you they spend a good length of time on their hearts so I'm counting on those to be very good signs. But another concern was that he had a chance of being born with Down Syndrome, and that's what I wont know until he is here. I love him no matter what but of course not knowing what I'll be facing is nerve wrecking. They will both be just perfect for me regardless if he has DS or not, I just pray that I can take away any kind of difficulties life may present to him if that is the case. It might have been selfish of me to refuse to terminate and bring him into the world with something wrong but I am no murderer. I am happy with my decision and I love them more than I could ever imagine possible.

And now I'm going to change the subject to update you on a few things:
1-I'm hoping to sneak in the last 4D attempt to get baby girl's face this coming weekend, lets see what she does.
2-I just finished making the name blocks that will go in their nursery, but you wont see that until they are born, sorry!
3-My belly is getting heavier each day and I'm sure its one reason why I'm still having a hard time with my heart palpitations. I'm pretty much sitting on my behind all day, taking lots of naps and not being productive.
4-I'm going to be posting some maternity pics soon, they were taken last Saturday by my sister-in-law Z.
5-And last but not least, here is my belly pic from last week: 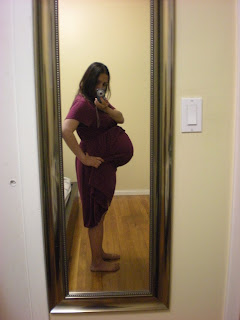