Not to brag or anything....

But my husband was the mastermind behind the blackout in the summer of 2003. Why? Well for me of course!

Thursday, August 14Th, 2003
Around 4:00 PM... BLACKOUT.
I left work early and was hanging out with Jeff. We were watching TV when everything went POOF! What was my first reaction? I asked Jeff if he paid the electricity bill.... he freaked out and wasn't sure, he then said obviously not.... I was a little upset. I really wanted to continue watching my show (I have no idea what it was).

Friday, August 15Th, 2003
Morning comes... no electricity. Noon comes... still no electricity. I was no longer mad at Jeff, he did after all pay the bill. Good boyfriend! 1:00 PM, Jeff, the most easy going person I know, is pissed off that they hadn't fixed the problem yet. I'm fine, he is not.... clearly the heat was getting to the both of us because we switched personalities. (I should mention that we were supposed to go out to dinner that night. A surprise for me, since the previous week I mentioned that we always do the same things and should try some new restaurant or something. Jeff said OK that he will plan something for next Friday...) OK, so he is bitching all day long and was already getting me in a bad mood. It was hot enough with no air, and all he could do is complain. He tried calling the restaurant through out the day and couldn't get in contact with anyone, so he assumed dinner would be cancelled. Fine with me. I can continue ignoring his bad mood and read my book.

Around 5:15 PM Jeff tells me that we will be going out after all since the restaurant will be using their back up generator. I said OK, and he started freaking out, yelling: "Get ready NOW, we have to go to the City and we have to be there by 6:30 PM." At this point I just wanted to throw some water at him because he was clearly overheated, why couldn't he make a later reservation instead of rushing me?

We got to Pier 81 and the fishy smell wasn't too romantic in my opinion (I'm not admitting nor denying that I wanted to throw him in the water for rushing me to get to a fishy smelling place).... until he mentioned that we were going on a dinner/cruise on the World Yacht.... (so glad I didn't push him). I was so excited!!! I had no idea that was not the end... I was already very very happy.

After dinner, he asked me to go outside with him to get some fresh air. It was already dark outside and I could barely make out Manhattan since the electricity was still playing hookie. The next thing I know Jeff is hugging me and giving me a very romantic kiss, and he suddenly just let go very abruptly (what a mood killer!), but then he got down on one knee and while I started crying 'cause I figured it out at that point, he asked: "Shanny, would you do me the honor and make me the happiest man by becoming my wife?" I said "bwaa, sniff, sniff, bwaaaYESsss, sniff." He put my ring on and while sealing the engagement with my teary kiss, the lights in Manhattan came on....
IT WAS BEAUTIFUL!!!! 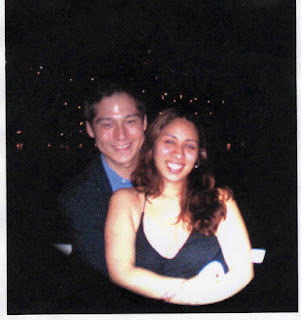 (Sorry you can't see the lights too good, but take my word for it, it was beautiful)

Thanks honey, screwing up Con Edison just so that I can have that moment after saying yes made it the most romantic engagement I could have asked for! As soon as we went inside "Wonderful Tonight" by Eric Clapton came on and we danced to it... I must say it was indeed wonderful... I couldn't stop smiling.
After we got back from Manhattan, Jeff decided to take me out for dessert, even though we were full.... I was so happy that anything he came up with sounded great, he could have said lets rob a bank and I would have gone for it. (I work at a bank now, but please don't freak out I wont rob it.. the moment is gone) When we got to the diner, yes a diner, hey! He had to improvise since his original plan of where we were going was cancelled thanks to the blackout, my parents and his were waiting to celebrate with us. Our brothers and their lovely wives, my sister and her lovely kids and husband.... All the people who are dearest to my heart were there to shock the hell out of me.

I then understood why Jeff was freaking out all day, he had planned that night for a while and everything seemed to be going wrong. I have to mention that in his nervousness he only shaved the right side of his face, so the other half was quite hairy the next day... I still wish I had taken a picture of that, it was funny.

I had the most wonderful engagement and I want to thank the whole country and Canada for being "in" on it.